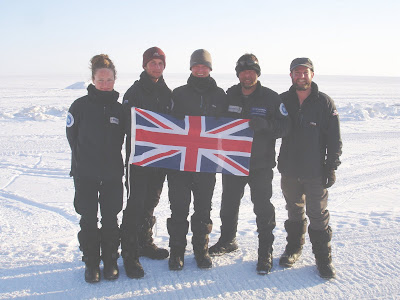 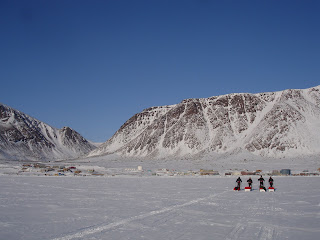 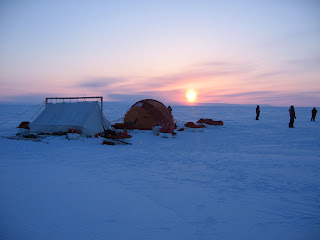 It snowed last night – but it sounded more like rain falling on the tent. True enough, in the morning we emerged to find our pulks covered in that nasty wet type of snow we expect in the UK – but not in the Arctic.

We skied for the first hour before breaking out into a line again to chat for the rest of the day.
In the morning I noticed black lumps on the ice – from a distance they looked like rocks. But after a couple of minutes I realised that they were seals resting by their breathing holes in the ice. All through the day we saw seals basking on the frozen sea and occasionally dropping back through the ice and into the water below.

Later in the afternoon we passed some huge icebergs. By this time the weather had warmed up and I was getting dehydrated. My water for the day, made from boiling up snow this morning, was quite salty because the sea ice had clearly leeched its salt into the thin snow covering we had to use.

We finished the day just 14 miles from Grise Fiord! With binoculars we can see some outlying buildings but not the town itself - not yet. Tomorrow we hope to cover the final miles and complete our month long journey. Let’s hope for another day of good weather, but even as I write this I can hear that the wind has picked up again...
Posted by Jon Heggie at 16:07 No comments: 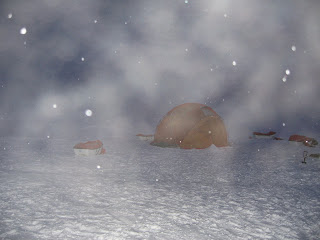 It was very windy overnight. Luckily we’d secured the tent well against the possible storm, so we managed to get a good night’s sleep. In fact I was unusually reluctant to get up this morning. I think I’ve softened up a bit with the improving weather.

We’re all finding the terrain a bit tedious so to keep our spirits up we skied next to each other so we could chat. In the afternoon the weather closed in and visibility dropped to a hundred feet or so. But later, in the distance, we saw some grey clouds – a clear indication of open water and that we are nearing Grise Fiord. It will also mean there will be more bears in the area for the next few days.

We got a weather report from the Warden this morning. The next few days are looking windy - with 40 mile an hour gusts. Our biggest concern at the moment is that a storm will delay us getting to Grise - but this doesn't seem likely.

The day started with a strong breeze which made the tents difficult to handle. But we had good ice all day and took the opportunity to have a skiing lesson to help improve our pace.

We achieved 15 miles today, so we are on track for getting to Grise on Thursday evening. At this stage we’re just hoping that the next few days pass uneventfully.
Posted by Jon Heggie at 04:19 No comments: 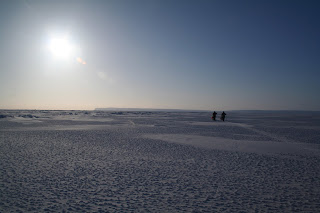 I began to find the terrain tedious today. I found it difficult to let my mind drift and became frustrated with the pace - although we were actually covering the ground well. I have been thinking much more about the end of the expedition and the re-adjustment to normal life.

Mark and I committed to getting the team within 60 miles of Grise by the end of the day. With 59.9 miles to go we made camp!
Posted by Jon Heggie at 04:16 No comments:

We’ve had a couple of really quiet days. The ice has improved and progress has been easy.

"Petrol and matches".
Posted by Jon Heggie at 04:13 No comments:

A bright and sunny start this morning. We put another call in to the Warden and we get the same advice - that the ice will clear.

We continued to head east and it’s hard work - I strip down to my base layers to stay cool. My foot is much better - it finally blistered so was much easier to deal with.

Phil and Becks had problems with their ski skins working loose. Both were fixed easily enough but the interruptions broke the rhythm of the day.

In the afternoon we came up against some "big" rubble - lumps of ice the sizes of cars! Crossing the rubble takes some nerve as you are climbing really high onto the slabs of ice.

We continued until 9.30pm and completed 12 miles. This was short of our goal but reasonable for the terrain and we were reluctant to push too far into the night at this stage.

As we neared the site where we camped the ice cleared and we passed some really massive bear prints. We are hoping for a quiet night!
Posted by Jon Heggie at 04:12 No comments: