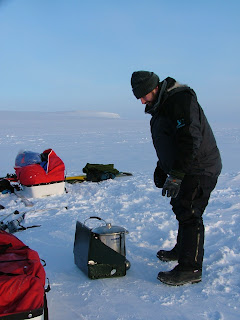 April 12th (Day 11)
The day began flamboyantly when one of the stoves leaked some fuel and set the tent and my glove on fires. This was particularly annoying as I was wearing my gloves at the time. The one good thing about being surrounded by snow is that it’s very quick to put out a fire, so no harm or injury done. But we did have to apologise to Mark for scorching his tent. After this little drama we packed up an headed out to sea.

Within 2 miles we began seeing polar bear tracks - including those of a mother and cub (probably the most dangerous combination if you get too close). But no sign of the real things yet – don’t know whether to be relieved or disappointed about that.

We had good sea ice for about 5 miles and then we came up against a mass of rumble (?rubble?JH) which stretched to the horizon on both sides and as far as we could see. With no way around we began to pick our way through the maze of broken ice. We made camp tonight in amongst the rumble - how long it will take to clear it we don't yet know.
Posted by Jon Heggie at 05:30