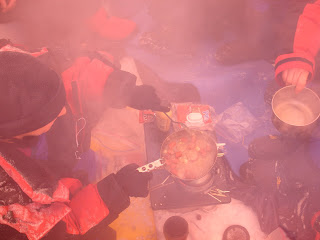 (April 20th) Day 19
It was windy when we took down the tents so when the wind died down we took the opportunity to repack our pulks without fear of our kit blowing away.

We skied down Viks Fiord which was absolutely stunning; as good as anything I have seen in the Highlands or British Columbia. Great rows of hills, 3 or 4 deep, lined the Fiord all day and there was not a single sign of human life to detract from the beautiful landscape.

We have now crossed Devon Island and will be on sea ice for the remainder of the trip. This should make the going much easier.

Camp life continues to be interesting; Phil cut his hair last night – using the tiny scissors on his Swiss army knife. As we don’t have a mirror he got Ian to tell him when the scissors where in the right place and then … snip! It won’t win awards or set any trends but it might be enough to make Toni & Guy weep.

I haven't had a chance to send the blog updates for a few days as we have been so busy. And when I went to fire up the pda, the battery was flat and the charger we’d brought wasn’t working. A bit of investigation and I found that a fuse inside the charger had blown. As we didn't know there was a fuse we hadn't brought a spare and a quick scan of the bleak ice filled horizon suggested just how difficult it would be to find a Maplins nearby. But those who know me know I love a challenge. I found that by squeezing the fuse into the middle of a safety pin I could bypass the break and get the charger working - so we're back in action!
Posted by Jon Heggie at 10:24