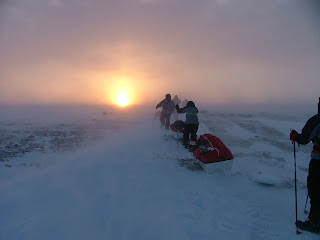 We entered Jones Sound today - the piece of sea that we will cross for remainder of our journey.

Just to our north is the Fram Sound which offers a route to the main Arctic Ocean. The strong currents here mean that areas of the sea never freeze despite the cold temperatures. The result of this and the tidal movements is a big spear of ice rubble extending out into Jones Sound; cutting right across our direct route to Grise Fiord.

We know that the rubble is too deep to cross so we put in a call to the Warden at Grise Fiord for satellite information on the state of the ice. He told us it looks like the ice extends about 15 miles south from where we camped last night and we spent the day drifting south while trying to maintain progress towards Grise.

The Warden gave us permission to burn some rubbish which we have been carrying – this instantly shed about 20kg from the team’s pulks. We marked the site of the burnt rubbish with a broken ski.

While walking we saw a couple of birds - some sort of finch and a crow. These looked really out of place in these conditions.

The sun was out and we got really hot as we moved; I was down to my base layers but still sweating. The base layer bottoms I was wearing chaffed quite badly and gave me something else to powder in the evening.

My left foot hurt again all day but no worse than yesterday. I broke another binding and tried to ski on but found it impossible to keep the skis apart. I bodged another repair so now have home-made bindings on both feet – still, only 110 miles to go!

We managed to hit a bit of rubble towards the end of the day but having committed to making 14 miles we pushed on. We made camp at about 7.30pm tired but satisfied.
Posted by Jon Heggie at 10:56