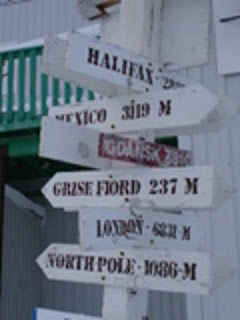 1st April - Resolute Bay
Resolute is the staging post for so many Arctic expeditions that South Camp Inn, our hotel, is absolutely packed at this time of year. You don’t really expect to have to pre-book in the Arctic – but you do.

Polar Race are in town training 13 people for a race to the position of the 1996 Magnetic North Pole (this is continually moving north-west). They are filming the training so watch out for the documentary soon – especially the moment when a competitor had to chase down a Husky puppy that had run off with his glove. Priceless.

On Monday and Tuesday we camped out on the bay. This allowed us to test our tents, stoves and some of the specialist kit we need for the trip. It also gave us the time to perfect our drill for a polar bear attack. This is vital, very serious and happily working very well.

Three of the team are carrying flares and bangers which will hopefully scare off any snooping bears. Mark and I carry shot guns in case they don’t get deterred. If the worst happens and we need to shoot one of the bears we will have to radio the authorities to explain what happened and give its position for collection.

Our planned route has been changed to avoid the open water we had been warned about. We will now cross Cornwallis Island itself rather than going around the island on the sea ice. We have relayed this to the local police so they know where to look for us should they need to. The new route will save about 10 miles in terms of distance but will make the first part of the expedition much harder. We expect the land crossing to take about a week.

I am anxious to get going tomorrow morning. I had a bit of back ache on Monday but this seems much better now and I just want to get under way, hoping that the first few days go smoothly so we can settle into a rhythm. We aim to start pulling around 10.00 – it’s all got very, very real.
Posted by Jon Heggie at 08:53